Type “54-40” in Google; you’ll likely get “14” before the numerous achievements of one of the city’s most famous — and long-lived — bands.

But 54-40’s release Keep on Walking next month also happens to be the quartet’s fourteenth full album.

Launched in an East Vancouver bar in 1981, they boast three platinum-selling albums – Dear Dear, Smilin’ Buddha Cabaret, and Trusted By Millions – and one Canadian gold-selling album, Since When.

This year, they were inducted into the Canadian Music Hall of Fame, and their new single, the imminent album’s title track, was released in May.

Metro reporter David Ball talked to bassist and co-founder Brad Merritt ahead of Friday and Saturday’s shows in his Vancouver hometown, and wanted to know whatever happened to the famous Vancouver neon sign that once appeared on their hit album Smiling Buddha Cabaret.

Here are exerpts of our chat:

Metro: How are you getting ready for your shows?

Brad Merritt: It starts months before we actually play the Commodore Ballroom — what songs we want to bring back, which new songs to play, and how we want to reinterpret any of them. Our little group will have a rehearsal on Thursday in Vancouver. Then Friday we’ll be ready to go!

Wait, you say ‘our little group’ — that’s pretty endearing since you’re obviously so well-known from my generation.

Not to be insular, but we’ve always done things our own way and for our own reasons. It’s not like we’re aspiring to something within the industry or out to impress other people — without putting too fine a point on this, we actually do consider ourselves artists.

We write songs and perform them. That is what we do. And we create because we feel compelled to do so. It’s not like we’re trying to climb up the charts again or sell a bunch of records. We’re not trying to become famous —

I guess you’ve done that!

(Laughs). We did that and we’re kind of on the other side of that right now.

Going back to your 1994 Platinum album, Smiling Buddha Cabaret. Have you seen the original venue’s neon sign on display at the Museum of Vancouver?

Actually, we donated that to the City of Vancouver about 10 years ago. In 1993, we read that they’d taken down the sign and it was for sale. So although we didn’t really have any money, we bought it. We were making a very eclectic record, and thought, ‘Let’s call the record that and use this as our art.’

We built a huge road case for it — it cost as much as the sign, about $3,000 — and took it across Canada as the backdrop for most of our shows. 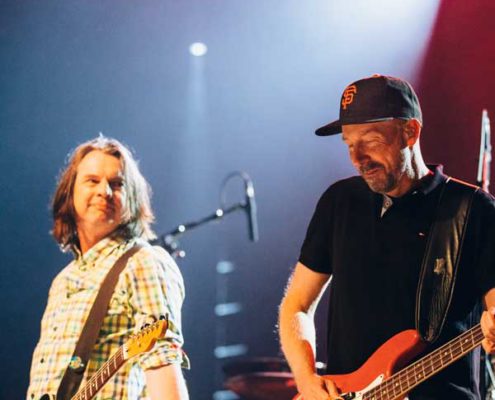 You and Neil have been the backbone of the band from the beginning; you’ve been through a lot of other members. What makes you not hate each other after all these decades?

Well, he’s been angry with me and I’ve been angry with him. And when we were young, we had a lot of anger! (Laughs). In rehearsals, at least half the time was me and Neil arguing. But then you get tired, and we understand each other better. We’ve found ways to keep it interesting — and we have a great sense of humour. We’re like brothers; he’s like family. And more often than not, we actually like each other.

You must be excited about getting into the Canadian Music Hall of Fame?

People who are invested in our songs wanted to see that — and it’s happened.